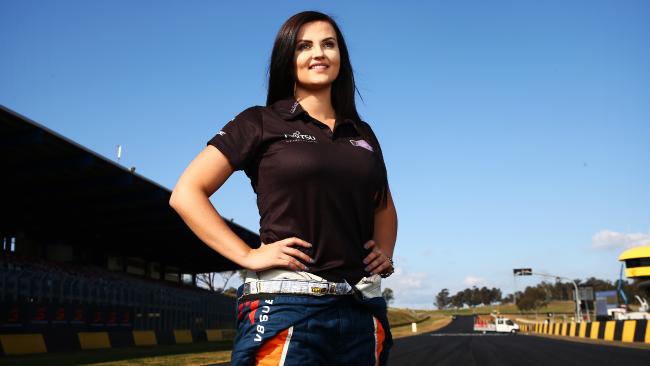 RETAIL boss Katie Page is revving up her support of women’s sport, signing a sponsorship deal with the first all-female driver pair to race in the Bathurst 1000 in 17 years.

The Harvey Norman CEO has leapt on a chance for the retail giant to back 20-year-old racer Renee Gracie and Swiss champion Simona De Silvestro, who will tackle Mount Panorama together next month in a Ford Falcon V8 Supercar.

She also revealed this week the company is set to advertise across Network Ten’s coverage of netball’s ANZ Championship next year, enabling the elite trans-Tasman competition to be shown on the primary channel.

When Page caught up with V8 Supercars boss James Warburton to check out her custom-designed helmet, she fired up about the lack of support for women’s sport in Australia.

“If you look at the amount of money that goes into female sport in this country, it’s disgusting,’’ Page told me.

“You’ve got these highly talented girls and women in lots of sports doing amazing things, breaking the barriers, and they’re just not getting the coverage they deserve.’’

Warburton, the former Seven and Ten TV executive, predicts the all-female team will be the talk of Bathurst this year at the race made famous by the likes of Peter Brock, Dick Johnson and Allan Moffat.

Gracie, an ultra-competitive Gold Coaster who took up go-karting as a 13-year-old, began driving Porsches in the Carrera Cup series three years ago and is presently competing in the V8 Dunlop Series.

De Silvestro, her co-driver who competes in America’s IndyCar series, is regarded as one of the world’s best female drivers, but she has never driven a V8 Supercar.

They are the first all-female driver combination to tackle the iconic event since Kerryn Brewer and Melinda Price finished 11th in 1998.

“This year will be a learning experience — we’ll be wanting to stay out of the carnage, stay in the race, and you never know what’s going to happen in the last few laps,’’ Gracie said.

The pair has been granted a wildcard entry for two years but Gracie wants to be a permanent player on the V8 Supercar series “within three or four years”.

“To have someone like Katie Page become involved is just incredible — you just don’t know which other organisations or leaders will take an interest because of her lead,’’ Gracie said.

Harvey Norman’s two-year deal with the pair follows a series of female-focused sponsorships, including the NRL’s Women in League round, the Jillaroos, the Auburn Giants Australian football team, paraplegic equestrian Emma Booth and showjumpers Edwina Tops-Alexander and Julia Hargreaves.

“We like to support things which, quite frankly, are different. A lot of companies choose the big names, the easy stuff, we don’t. We want to help the grassroots,’’ Page said.